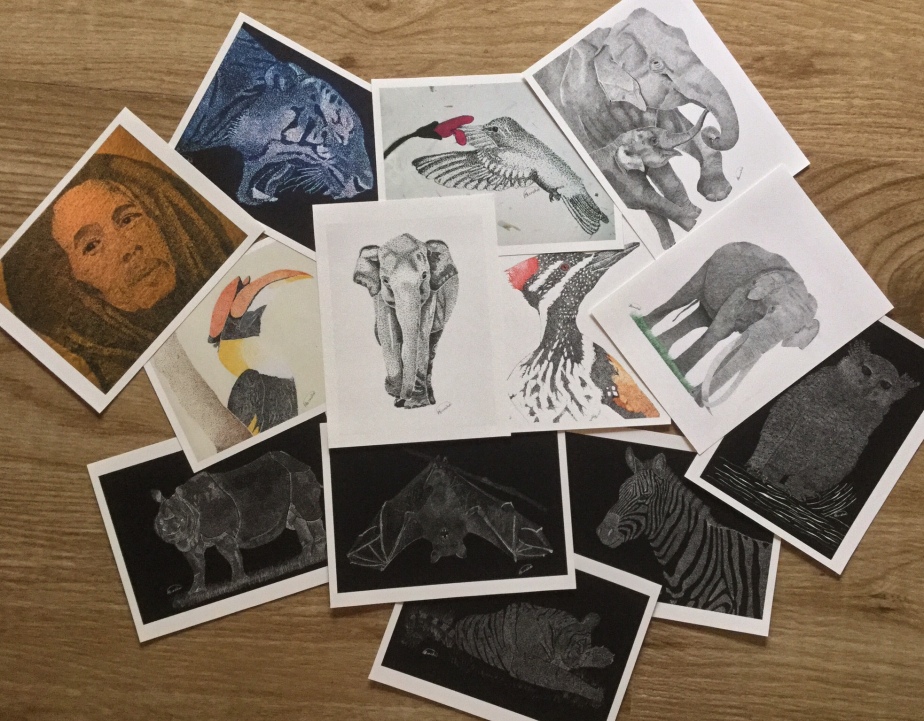 Started on a whim, my love for stippling work has grown much deeper. I loved the outcome of the first piece (Bob Marley) and gave the tiger a shot. I didn’t understand the most important thing about stippling – patience and concentration. Those days I couldn’t focus on a single thing until the end because I had to multitask. The job demanded it then. But as and when I started working on different pieces, my attention span increased and I was loving the end results. That doesn’t mean I haven’t had moments where I wanted to give up half way through a sketch. And I realised later that if I let a sketch be without completion, I found it difficult to go back to it. I hope someday I finish the half done sketches that are lying on the side.

The link between mammals and birds are the only flying mammals, Bats. Not the usual choice for a subject to sketch but the combination of the black sketchbook and a crazy friend doing PhD on bat evolution helped in choosing this subject.

“When a zebra’s in the zone, leave him alone!” said Marty.

Well…. unless in the zone, the optical illusions kinda patterns on a zebra can get you extremely confused.

It is no surprise that the ultimate monochrome member in the animal kingdom is Zebra.

I realised there is no dearth of things to draw or write about. It’s the motivation that fails us at keeping up with the new year resolutions until they become habits. I have finished more pieces in the last four months than I have done in the last two years dominated by work and travel. One of the travel destinations was Rajasthan and my first stop was Ranthambore national park. Known for its tigers, we witnessed one lying on the tracks, lazing on a warm October morning. This adorable image of an otherwise ferocious predator stuck to my mind.

I started working on it early in the evening while the sun was still around. As it got darker, the distant rumbling skies threatened to rain. The unpredictable summer evening showers always lead to power issues in the jungle. The pitter patter on the roof eventually started and I prayed desperately to any and every electricity god not to throw us into darkness now. As the hours passed by, my sleepy state crawled into my consciousness nudging it to call it a day and I kept delaying it. I was almost done with this piece and finishing touches were due. As I wrapped up this sketch, I could hear the tiger roar in the distance in the dead of the night.

When I first set my eyes on the reference picture, I wanted to draw it for mom. I hadn’t decided on the medium or the style. One fine day I started drawing the outlines and moved onto picking up the pen for it. Few days of not being able to sleep and living by the high of completed portions, I managed to stipple my way through the giant of a mother and the tiny wrinkled baby. Here’s to all the mothers for their unconditional love.

The sketch was done on an A3 sheet using a 0.10mm Rotring pen and took about 30 hours to finish. This is my first attempt at making something at such a large scale. I have stuck to drawing in A6 or A5 pieces. The high from the sight of the completed piece has stuck and makes me go back to stippling. Helps me focus on the details like no other medium and keeps me grounded. More stippled pieces in the coming weeks.

I haven’t seen very many owls considering they dwell in the dark. In the last two years, I have probably seen them a total of four times. The love of birds also extends to these night dwellers and seeing them is a rarity. This happens to be a juvenile Spot-bellied Eagle Owl (Forest Eagle Owl) sitting in a heavily shaded tree in the late afternoon waiting for the sun to set before it starts taking plunges into the dark.

Anybody who has ever had to stare at a blank sketchbook wondering how and what to start it with, knows what I am talking about. I was visiting a friend in another city and we decided to go to the art store. Needless to stay, I was broke by the time I left the store.

The recently acquired sketchbook was left untouched as I sat for months dissatisfied with all the proposed beginnings. And one fine day, a picture of this gentle giant heading straight on, gave me the push I needed. Though I messed up this piece using a combination of different nibs with varying thickness, I reached this satisfactory result.

Ten days ago, the world was informed of the sad loss of Sudan, the last male northern white rhino in the wild. The lure of the horn to the poachers has wiped out this species from the wild. The story isn’t very different for the rhinocerous species living in Asia. The greater Indian rhino once spread across the northern half of the Indian subcontinent is now restricted only to the northeastern parts. A trip to the Kaziranga national park in Assam got me up close to these giant herbivores. Thanks to sport hunting, this species was near extinction. The population bounced back eventually, until poachers came into the picture and the numbers dwindled again.

The one horned rhinos are still vulnerable but hopefully they wouldn’t face the same fate as their distant relatives in the African continent.

Obsession with handmade paper from Pondicherry led to making a birthday card for a fellow stationery hoarder. This time a 0.1mm rotring pen replaced my regular fountain pen. And over a period of six hours, I managed to finish this piece realising that irrespective of how fine a nib one picks, the choice of paper matters too.

The consistent blotting of the ink on the paper didn’t help and there were parts that I had to go over again and again because the blotting diluted the effect of white. Despite the challenges, the effect of the yawning tiger in white on the dark blue paper was better than I ever imagined. I am glad the birthday girl liked it and this piece adorns her living room wall.

A trip to the eastern coastal town, Pondicherry, added handmade paper to my stationery hoard. One of the evenings I pulled out my handmade paper stock wanting to do something with it, but wasn’t sure what. Like most evenings, the radio was playing in the background and there came the ‘Redemption song’. That led me to Bob Marley’s picture. I wasn’t sure how pencils or charcoal would behave on such a hard-ridged paper. So I picked up my fountain pen that I use for writing and experimented a stippled piece of art.

Its hard to believe but all of this happened by chance and I fell in love with stippling. By the early hours of the morning, I had Bob Marley looking at me out of a postcard sized handmade paper.